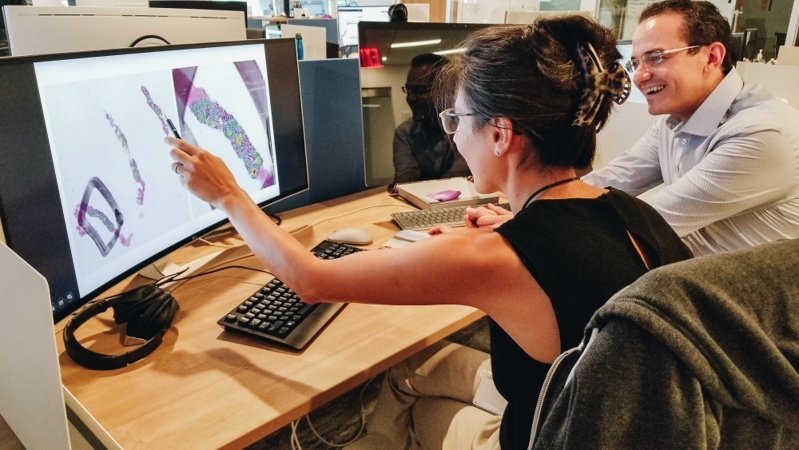 Tech companies have been questing for years to develop artificial intelligence able to help diagnose cancer—and now one has an FDA clearance to do just that.

The agency granted its first clearance for a cancer diagnosis AI program to Paige, a New York-based company launched in 2018 with data and digital pathology tech from Memorial Sloan Kettering Cancer Center. The product, Paige Prostate, analyzes slides of biopsied prostate tissue to spot the hallmarks of malignant cells.

The software highlights areas of a standard prostate biopsy image that are most likely to contain cancer and flags them for further review by a trained professional.

“This landmark approval of Paige Prostate by the FDA marks the beginning of a new era in the use of computer-assisted diagnostics for pathology,” Paige’s co-founder and chief medical officer, David Klimstra, said in a statement.

The product paves the way for “numerous future tools” that can help standardize and speed up pathology diagnosis, Klimstra added, and it’s making its debut at a crucial time.

Increasing the efficiency of diagnostic workloads is imperative because those workloads are growing fast, Paige says. The former Fierce 15 winner projects a 60% rise in the number of global cancer cases over the next two decades—while the number of available pathologists is not expected to keep pace.

“The authorization of this AI-based software can help increase the number of identified prostate biopsy samples with cancerous tissue, which can ultimately save lives,” said the FDA’s Tim Stenzel, director of the agency’s Office of In Vitro Diagnostics.

The prostate-focused software won a de novo clearance based in part on a clinical study evaluating the program’s use by 16 pathologists. Each evaluated a mix of cancerous and benign tissue slides, both with and without Paige Prostate’s assistance. The samples were gathered from more than 150 institutions to test the AI’s ability to work in different hospitals and geographies.

While a final patient diagnosis may be based on multiple biopsies and other exam information, the AI program did help improve overall cancer detection by an average of 7.3%. The software also helped cut down the number of false-negative diagnoses by 70% and false positives by 24%.

The prostate software previously received a CE mark for use in Europe last year, as has Paige’s breast cancer-focused offering, though the latter is currently only available for research use in the U.S.

At the top of this year, Paige raised $100 million in venture capital funding to help grow the company’s software engineering and commercial teams. It’s also been working with companies such as Philips and Perspectum to integrate its AI with digital pathology and diagnostic tools.

Elsewhere, companies such as Hologic and Ibex have been pursuing their own AI-driven cancer pathology programs.

Hologic, backed by a collaboration with Google Cloud, aims to develop software that can scan glass Pap test slides and use AI to select those that may be the most relevant to spotting the early signs of cervical cancer.

Meanwhile, Ibex received a CE mark earlier this year for its breast cancer program designed to identify different forms of the disease and grade its severity. The company previously scored a European approval for a prostate cancer pathology program in early 2020.