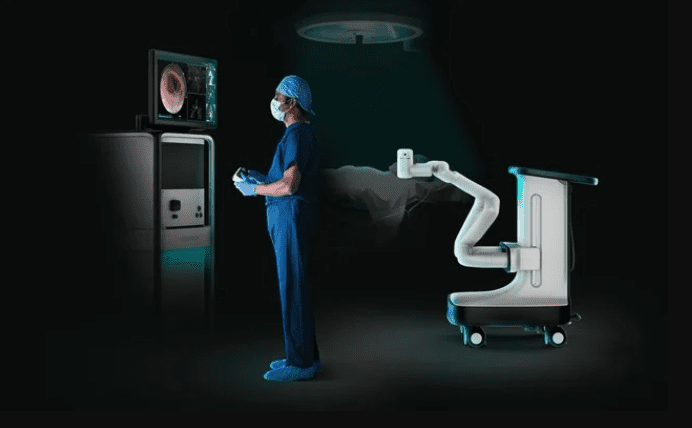 Auris Health has added another jewel to its crown.

The Johnson & Johnson subsidiary earned a second FDA clearance for its Monarch robotic surgery system, it announced Monday, allowing the robot to be used in kidney stone removal procedures. According to Auris, housed under J&J’s Ethicon division, that makes Monarch “the first and only multispecialty, flexible robotic solution for use in both bronchoscopy and urology.”

The system was previously cleared in 2018 to help surgeons get a better look at hard-to-reach and potentially cancerous nodules found in the deep recesses of the lungs.

With the new urological clearance, doctors will be able to use the surgical robot to snake an endoscope into the kidney to break up and suction out kidney stones, with an attached camera providing a real-time view of the area the whole time.

Monarch has been proven especially useful in percutaneous nephrolithotomy procedures to remove kidney stones, or PNCL, which reach the stone through a small incision in the patient’s back. Though this method is highly effective at removing larger stones, it’s more difficult to perform than the widely used ureteroscopic method, which sends a scope through the urethra and bladder to reach the stone.

With Monarch’s help, however, surgeons can use a video-game-like controller to send the endoscope safely through the skin to the kidneys and remove the broken-up kidney stones and any additional fragments with greater precision. The system can also be used in ureteroscopic procedures to remove smaller stones.

“Monarch reduces the complexity of gaining high-quality percutaneous access and aids stone clearance efficiency through simultaneous fragmentation and suctioning of stones with robotic assistance,” said Mihir Desai, M.D., a professor of clinical urology at the University of Southern California and a paid Auris advisor. “With this platform, many urologists may be willing to expand their practice to include percutaneous access and PCNL procedures, thereby increasing patient access to more effective treatments closer to home.”

Now that FDA clearance has been secured for the indication, Auris said it plans to launch a first-in-human clinical study of the robotic surgery system’s endourological applications later this year.

The Monarch system joined J&J’s line of succession in early 2019. At the time, Ethicon put forth a deal worth up to $5.75 billion—split between $3.4 billion in upfront cash and another $2.35 billion in potential milestone payments.

Under the terms of the acquisition, Auris’ founder and CEO, Frederic Moll, M.D.—also the founder of robotics maven Intuitive Surgical—joined his tech at J&J, where he’s now chief development officer of robotics.