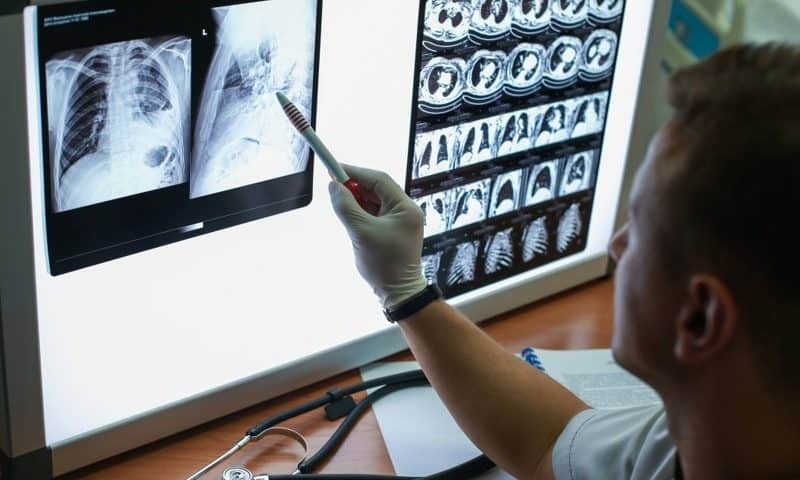 Johnson & Johnson’s cancer combo of amivantamab and lazertinib spurred a response in 36% of patients with a difficult type of non-small cell lung cancer (NSCLC) that has relapsed, a result the healthcare giant says could position the therapy as an alternative to tough-to-tolerate chemotherapy.

The 45 patients also saw the response last for an average of 9.6 months in the trial called Chrysalis, which examined chemotherapy-naïve epidermal growth factor receptor (EGFR) mutant NSCLC that has relapsed after taking AstraZeneca’s Tagrisso (osimertinib).

Updated data from the Chrysalis trial are slated to be presented at the virtual American Society of Clinical Oncology meeting in June.

Tagrisso, a tyrosine kinase inhibitor (TKI), has become a useful treatment for EGFR-mutated lung cancer and the standard of care, but patients often develop resistance to this type of drug over time. Lazertinib is also a TKI, while amivantamab is a bispecific antibody that targets EGFR and MET mutations.

J&J is hoping that paired together, the two treatments can provide a bit more quality time for patients with this difficult-to-treat cancer.

Patients whose disease stops responding to Tagrisso have few options to turn to, according to Craig Tendler, VP of oncology and clinical development and global medical affairs at J&J’s pharma-focused Janssen unit.

“We think it’s a very large segment of patients and a group that we hope to impact in a very positive way and improve their long-term outcomes with a tolerable regimen, and one that has a very favorable benefit-risk profile,” Tendler said in an interview.

Data from the newly analyzed cohort has begun to tease out which patients might be able to skip chemotherapy and just take the combo, Tendler said.

When the group was narrowed down through genetic testing to the 17 patients who had resistance mechanisms, the response rate rose to 47%. Patients without the resistance biomarker had a 30% response.

Amivantamab and lazertinib did not raise any significant safety concerns, whereas the standard of care chemotherapy can be a difficult road for patients.

“These durable responses are really beginning to suggest that they can have a targeted therapy option with better tolerability,” Tendler said.

Data from Chrysalis and the genetic testing information prompted Janssen to launch two new trials of the combo. The company’s goal is to improve outcomes compared to chemotherapy alone and further fine-tune the genetic testing to define the patients most likely to respond.

“We’re very excited to have the organizational commitment and some very promising drugs in this setting to address this unmet need,” Tendler said.

Tagrisso is a major blockbuster drug for AstraZeneca, bringing in $4.33 billion in 2020 and collecting indications in NSCLC since its approval in 2015. An estimated 235,760 adults in the U.S. are expected to be diagnosed with NSCLC this year.

Janssen is hoping to slice off more and more of that market with upcoming trials. The combination is going head-to-head with Tagrisso as a first in line treatment for patients with advanced NSCLC whose tumors harbored EGFR or MET mutations. Tendler said the amivantamab and lazertinib combo was teed up for the showdown after 100% of patients responded in an early trial, a response that has proven durable.

“That provided a very strong clinical rationale and justification for going right into the frontline setting and the tolerability again was very, very good,” he said. “Based upon those two pieces of evidence, we felt that the best place to test the combination and really to measure it against the standard of care osimertinib was really in the frontline setting.”

Janssen is already seeking approval for amivantamab alone in patients with metastatic NSCLC with EGFR exon 20 insertion mutations whose disease has progressed on or after platinum-based chemotherapy. The FDA decision is expected in the next few months, Tendler said.

Should the treatment be approved, it would mark a first for this patient population. Many patients have already had access to the drug under a compassionate use program, according to Tendler.

Amivantamab is the subject of five trials at the moment, with Janssen positioning the therapy as a major player in lung cancer. Tendler said Janssen is considering other tumor types that may benefit from the therapy as well.