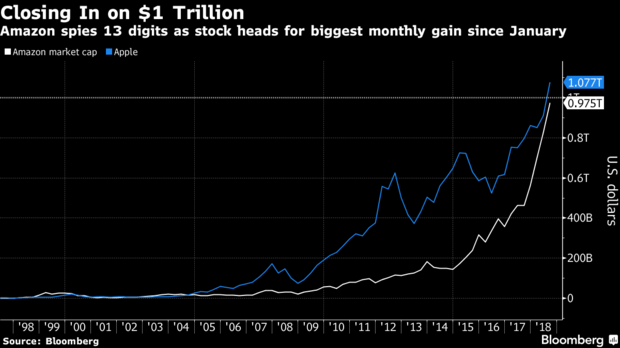 The S&P 500 Index fluctuated a day after the gauge closed above 2,900 for the first time. Electronic Arts Inc. slumped after cutting its forecast for net bookings, while Amazon.com Inc. climbed toward a $1 trillion market valuation. Almost every sector fell on the Stoxx Europe 600 Index. Argentina’s central bank jacked up its benchmark interest rate, already the highest in the world, to an unprecedented 60 percent in a bid to reverse a rout in the peso.

Treasuries edged higher with core European bonds. The euro fell after the EU’s chief negotiator warned the bloc must be prepared for a disorderly Brexit. Canada’s dollar weakened after second-quarter growth missed estimates.

Equities took a breather as August draws to a close after rallying for most of the month, with a gauge of world stocks heading for a second weekly gain and U.S. shares posting fresh all-time highs. Investors are cautious amid a slew of risks to the global outlook, not least U.S. trade and foreign policy. President Donald Trump on Wednesday accused China of undermining efforts to pressure North Korea into giving up its nuclear weapons — a potential indication that his trade war with Beijing is exacerbating geopolitical tensions.

Elsewhere, oil futures added to gains following a bigger-than-expected decline in U.S. crude stockpiles. Emerging-market stocks and currencies declined, with the lira tumbling on a Turkish holiday amid reports the central bank’s deputy governor is set to resign.

Here are some key events scheduled for the remainder of this week:

These are the main moves in markets: