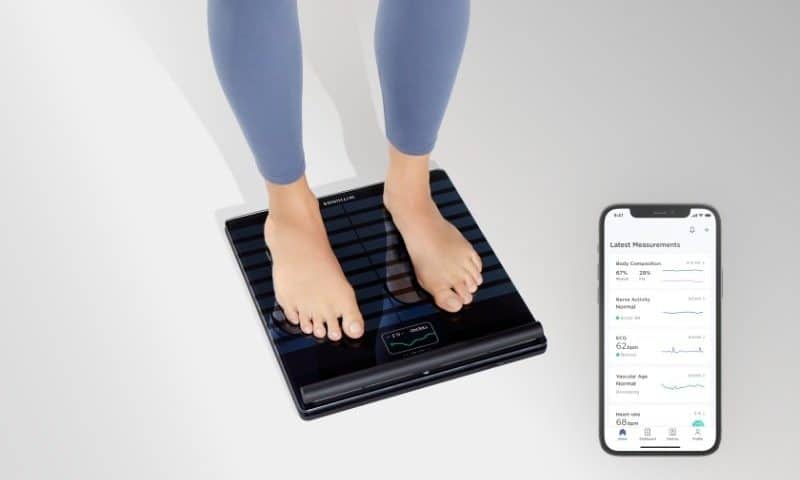 Smart device maker Withings inked a deal to buy Impeto Medical, a developer of sensors for detecting potential nerve damage, which the companies plan to incorporate into a range of home-focused tech.

Their first device, the product of a previous collaboration, actually made its debut last week at the Consumer Electronics Show. Withings’ Body Scan is an upgraded version of the humble bathroom scale: Instead of just listing a person’s weight, it can also perform a six-lead ECG and provide stats on body fat and water composition, muscle mass, heart rhythm and vascular age.

The goal, after securing an FDA clearance and CE mark, will be to provide access to a simple daily analysis of biomarkers linked to common health conditions, as well as warning signs of potentially serious cardiovascular, neurologic and metabolic diseases.

Electrodes built into the scale’s platform and retractable handle employ Impeto’s Sudoscan technology, a method that measures the response of sweat glands in the palms of the hands and soles of the feet when given a light electrical stimulus for 30 seconds. Changes in the skin’s reactions and conductance can be an early marker of conditions such as Parkinson’s disease, diabetes and peripheral nerve damage.

“With Body Scan, we will turn the morning weigh-in into a sophisticated home health check with access to holistic health data and personal health programs created by medical professionals,” Withings CEO Mathieu Letombe said in a statement during the J.P. Morgan Healthcare Conference.

He estimates the smart scale will launch in the second half of this year.

Impeto’s tech has also been embedded into tens of thousands of devices for companies and hospitals worldwide, according to Withings, which maintains a portfolio of hybrid watches, smart thermometers and other trackers.

Impeto has been an important partner in the past, Letombe said. Now, as part of Withings itself, the companies can combine their expertise—and Impeto’s Sudoscan technology—to develop a variety of devices that could help people monitor and manage various diseases at home, he said.

Under the deal, all Impeto staff and patents will be absorbed into Withings. The financial terms were not disclosed.