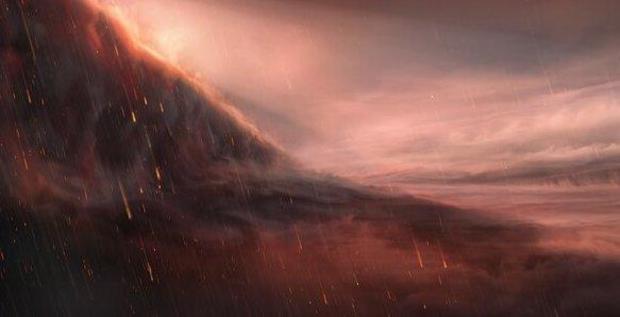 On one particularly hot planet, hundreds of light-years away from Earth, the forecast is cloudy with a chance of liquid iron rain. Scientists recently discovered the bizarre exoplanet, which they referred to as one of the most “extreme” they’ve ever observed.

One face of the planet, its “day side,” is always facing its parent star and permanently roasting, while the cooler “night side” remains in constant darkness. Because of this, when strong winds push vaporized iron to the night side, it condenses into droplets, creating an iron rainstorm.

On the day side, the planet receives thousands of times more radiation from its parent star than the Earth does from the sun. The extreme heat causes intense winds that bring iron vapor from one side to the other, where the temperature cools to around 1,500 degrees Celsius.

“One could say that this planet gets rainy in the evening, except it rains iron,” David Ehrenreich, a professor at the University of Geneva in Switzerland, said in a press release. Ehrenreich led a study on the exotic planet, known as WASP-76b, which published this week in the journal Nature.

WASP-76b is located some 640 light-years away from Earth in the constellation Pisces. It’s a gas giant, like Jupiter and Saturn in our solar system.

Using the new Echelle Spectrograph for Rocky Exoplanet- and Stable Spectroscopic Observations (ESPRESSO instrument on ESO’s VLT in the Chilean Atacama Desert, astronomers found day-night chemical differences for the first time on a “hot Jupiter” planet. A strong amount of iron vapor at the border separates the planet’s two sides.

The astronomers were able to detect the chemical differences using the very first scientific observations done with ESPRESSO by a team from Portugal, Italy, Switzerland, Spain and ESO in September 2018.

“The observations show that iron vapor is abundant in the atmosphere of the hot day side of WASP-76b,” said María Rosa Zapatero Osorio, an astrophysicist at the Center for Astrobiology in Madrid, Spain, and the chair of the ESPRESSO science team. “A fraction of this iron is injected into the night side owing to the planet’s rotation and atmospheric winds. There, the iron encounters much cooler environments, condenses and rains down.”

The team plans to use the tool to continue hunting for Earth-like planets and studying exoplanet atmospheres. “What we have now is a whole new way to trace the climate of the most extreme exoplanets,” said Ehrenreich.

Why Is Yelp (YELP) Down 35.5% Since Last Earnings Report?