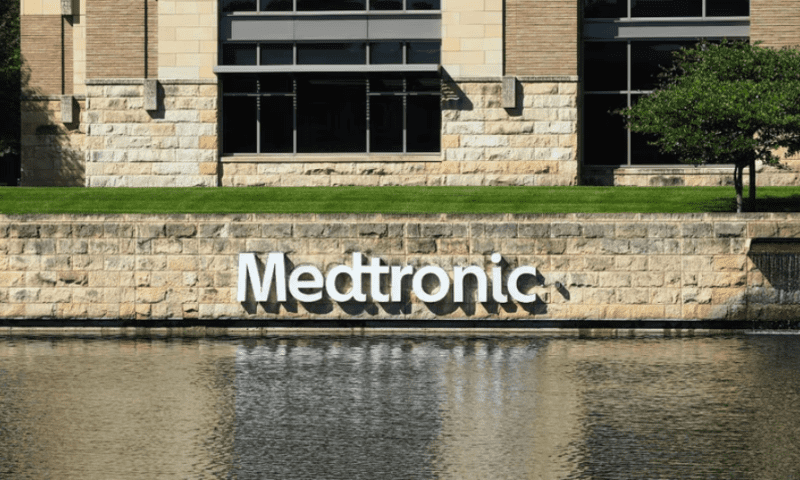 Medtronic has put forward a clinical study showing the success of a new type of minimally invasive defibrillator implant designed to interrupt a sudden cardiac arrest.

Compared to traditional implantable defibrillators that are wired directly to the cardiac muscle through the body’s major veins, the company’s EV ICD system instead connects a single lead underneath the breastbone outside the heart.

The goal is to avoid the long-term complications or infections that can happen when wires block or squeeze a blood vessel. The results of the single-arm trial were presented at the annual meeting of the European Society of Cardiology in Barcelona, Spain.

The study—with results simultaneously published in The New England Journal of Medicine—saw successful defibrillation tests in 298 of 302 patients, or 98.7%. Out of 18 recorded episodes of cardiac arrest, 100% were converted back to normal heart rhythms after delivering shocks.

The EV ICD system, with the main device placed under the left armpit, also provides backup pacing therapies to help alleviate palpitations, protect against tachycardia and assist with avoiding a defibrillation shock. The system’s size and battery life are similar to Medtronic’s previous implants.

After six months, 92.6% of EV ICD patients were able to avoid major complications related to the device or its implantation procedure, including subsequent hospitalizations, deaths and procedures to revise or reposition the device.

According to the company, 25 major complications were observed in 23 patients, the most common being a dislodgement of the lead wire. Meanwhile, 29 patients experienced inappropriate shocks, at an average of 10.6 months after implantation, with most linked to oversensing of the heart’s electrical signals.

Thirteen infections were reported, with four being related to the device pocket under the arm that resulted in the removal of the system; two of those infections also involved the incision site at the sternum.

According to Medtronic, the company has received a green light from the FDA to continue studying the device while the agency reviews its EV ICD premarket application.

“We are very encouraged by the high defibrillation effectiveness and strong safety profile of the EV ICD system seen in the study as we look to deliver less-invasive treatment options for patients at risk of sudden cardiac arrest,” study presenter Ian Crozier, a cardiologist at New Zealand’s Christchurch Hospital, said in a press release.

In conversation with Philips CMO Alexandra Gonçalves on cardiac imaging