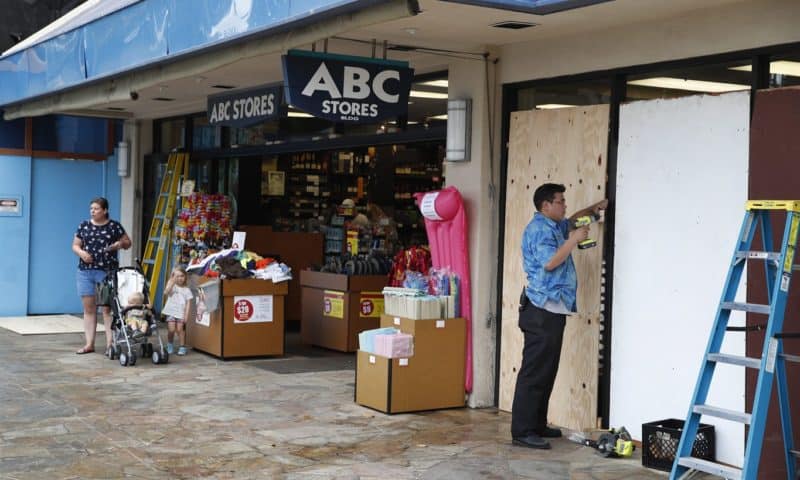 NEW YORK, N.Y. – As small business owners in Hawaii and California clean up following Hurricane Lane and wildfires, they’ll find there’s no one formula for recovery.

The same disaster can devastate businesses in divergent ways — a hurricane might tear the roof off one restaurant, flood another and leave a third with little damage.

Whether a business recovers often depends on how prepared it is, such as whether it has insurance and its computer data is backed up remotely. Owners should also find out what resources are available to them from the government, their communities and other entrepreneurs, says Craig Markovitz, a professor of entrepreneurship at Carnegie Mellon University’s Tepper School of Business. Communication with customers and vendors is also crucial, Markovitz says.

“Let people know you’re going to get back on your feet,” he says. Anything from a sign on a company’s premises to advertising to media coverage will help.

Markovitz also advises owners to rally their entrepreneurial spirit, which helped them succeed in the first place.

Here are the stories of business owners who were able to recover:

When Houston was inundated by over 4 feet of rain in four days, Farooq’s bakery was damaged by water that entered through the roof. She lost appliances including a commercial freezer and all her perishables including eggs and dairy products. Farooq estimates her losses at $30,000, and she was shut for about three weeks.

THE RECOVERY: Even as she was first dealing with the damage, Farooq began using Facebook ads to let customers know she’d be reopening, and to ensure they didn’t forget about her shop.

“I had an idea that the (customer) traffic was not going to be the same and we would run the risk of going out of business,” Farooq says.

Farooq kept advertising after she reopened, and revenue had returned to about 80 per cent of pre-Harvey levels by January. But because the neighbourhood was still rebuilding, Farooq decided to move the store five miles away, opening in May. Revenue is now 50 per cent above the level of before the storm.

The tornado destroyed Stokes’ cars and his office, which no one was in when the twister hit, and he later learned that his accountant had been killed. Stokes saw the area the next day; it was acres of rubble.

“If you had blindfolded me and brought me there, I wouldn’t have been able to tell you where we were,” he says.

Three of 50 employees had to quit because they lost their homes and needed to focus on rebuilding their lives. Three more were temporarily unable to work. He lost several clients whose homes were destroyed.

THE RECOVERY: Stokes’ church offered him office space, and the Visiting Angels franchise in Tulsa, Oklahoma, lent him a car and computer. About a month after the tornado Stokes found an office 12 miles away, in Carthage, Missouri, but he was unable to replace all his lost equipment and cars until he received insurance money six months later.

It took about a year for Stokes’ business to return to its pre-disaster functioning. He’s still based in Carthage but now has a satellite building in Joplin.

Wood stored near a meat smoker caught fire, heavily damaging the kitchen, sending smoke into the entire restaurant. It caused no injuries, but the restaurant had to be gutted.

THE RECOVERY: The brothers, who had several catering gigs on their schedule, realized they could still have money coming in by focusing up that part of their business. They quickly found kitchen space where they could prepare food. And other barbecue purveyors were ready to pitch in when they heard about the fire, Brent Reaves says.

“People started calling us and said, ‘Hey guys, if you need smokers, we can help,’” Reaves says.

With advertising, the catering business soared, helping fund the restaurant’s reconstruction. The rebuilt Smokey John’s will be 1,000 square feet larger to handle the booming catering business, and the Reaves brothers have set a goal of $1 million in catering revenue this year. They expect to reopen the restaurant in September.

Gaille’s second-floor office became flooded when nearby Lake Houston overflowed. He and his staffers couldn’t re-enter the building for three months — even after the water receded, it left behind dangerous levels of mould. When Gaille was allowed back in, he had to wear a mask.

THE RECOVERY: Gaille and his two staffers and 10 freelancers were able to keep working because most of their documents and records were stored online and could be accessed remotely. So the company had minimal disruption. But last fall, one of Gaille’s employees asked him to consider making the remote work arrangement permanent.

“I don’t want to go back to the office,” the staffer told Gaille.

The move is saving Gaille thousands of dollars a year in overhead — rent, utilities and commuting costs.

The hurricane hit as Tuck was shifting from being a Maytag appliance retailer and repair shop to a Mr. Appliance franchisee, doing only repairs. Tuck was able to move inventory from the store to a warehouse. It took nearly three days before Tuck could travel to the store because of debris and downed power lines. The store, which still had mock-ups of kitchens with appliances, was almost completely destroyed. But the office with all the company’s records was unscathed, as was the warehouse and his inventory.

THE RECOVERY: When Tuck was able to contact the Mr. Appliance corporate offices, the company offered to help him and the community, and told him it would send water and take over his phone lines and answer his calls.

Tuck didn’t try to find another retail space; over the next four months he sold off his Maytag inventory to homeowners who lost their appliances to the storm.

However, there was little demand for appliance repair and therefore little revenue coming in. Tuck’s insurance policy helped cover his financial losses and he also obtained a Small Business Administration disaster loan.

“It was our only means of survival,” Tuck says.

Physical damage at his company wasn’t an issue for O’Hara; it was the city’s overall devastation that for two years wiped out New Orleans’ tourism and convention industries. O’Hara also lost his house. He had to move away from New Orleans for more than a year, getting part-time jobs in Colorado to support himself.

THE RECOVERY: O’Hara worked the phones while he was away, staying in touch with clients, suppliers and tourism officials. He was working to convince people that despite the widespread belief that the city was in ruins, its most popular tourist areas including the French Quarter were undamaged and ready for visitors.

He also travelled around the country, meeting with clients. Even after moving back he worked side jobs, and in 2007, business began to trickle back in.

“In all, it took seven years to get back to our previous levels of revenue,” O’Hara says.