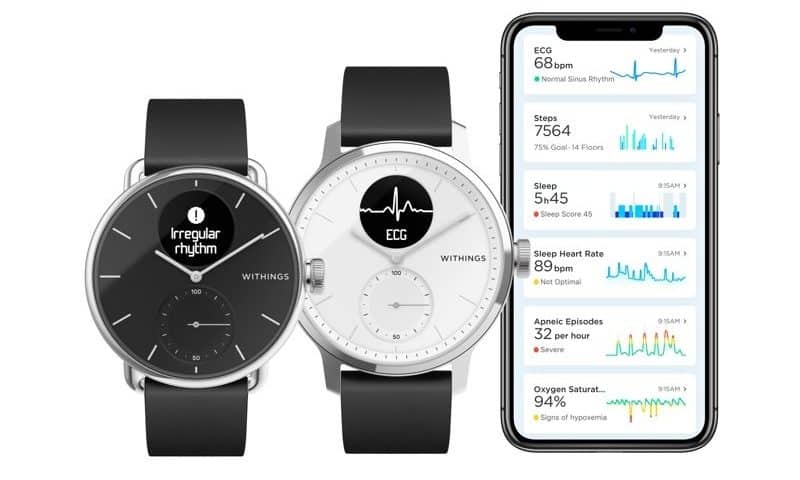 About a year after first becoming available in Europe, the ScanWatch from French medtech device maker Withings has received an FDA clearance, paving the way for a U.S. debut slated for early November.

Unlike the Apple Watch, which unveiled its FDA-cleared ECG app to detect signs of atrial fibrillation in 2018—three years after the device’s initial rollout—and then, in 2020, added on a pulse oximeter to measure blood oxygen levels, those and other health-tracking features are available from the get-go in the ScanWatch’s first iteration.

Withings’ FDA clearance covers its clinically validated ECG and pulse oximeter features. In addition to detecting indicators of abnormal heart rhythms and respiratory disorders, respectively, their readings are also combined with movement and pulse measurements in an algorithm that can detect breathing disturbances while a wearer is sleeping, a possible sign of sleep apnea.

Beyond its medical-grade features, the ScanWatch is equipped with all the typical trappings of a smartwatch. It automatically tallies steps, calories burned and elevation gained throughout the day and maps out workout routes using embedded GPS tech. Throughout a workout, the watch uses real-time readings of heart rate and exercise pace, along with the user’s age, gender and weight, to calculate VO2 max, a measure of the amount of oxygen consumed per minute.

The device is designed to be worn around the clock, thanks to what Withings claims is a battery life of up to 30 days. That enables it to perform in-depth sleep tracking, identifying long-term patterns and measures of sleep quality in addition to its sleep apnea-spotting capabilities.

Activity and medical data collected by the wearable are displayed both in the connected Health Mate app and on the watch face, which takes its design cues more from traditional analog timepieces than the all-digital faces of many other smartwatches.

“At Withings our core mission is to create beautiful devices people choose to use and wear every day so the medical data they provide can make meaningful impacts on their lives. ScanWatch has been clinically validated to detect AFib and can aid in the detection of breathing disturbances at night that can be signs of sleep apnea,” said CEO Mathieu Letombe. “It is our most ambitious medical watch to date and has the potential to benefit millions of people.”

The ScanWatch starts at $279, comparable to Apple’s price-conscious option, the Apple Watch SE, and about $120 less than the new, fully decked-out Apple Watch Series 7.

Meanwhile, as competition in the wearable space heats up, Apple is continuing to seek out medical upgrades to its own devices. If long-running speculation is to be believed, the Apple Watch could soon be equipped with glucose tracking, a blood pressure monitor, a thermometer and more.

There may also be an update in its ECG’s future. A recent follow-up analysis of the Apple Heart Study—which was used to secure FDA clearance of the feature—suggests that the ECG could be used to detect other arrhythmias besides afib, including premature atrial complexes and premature ventricular contractions, atrial tachycardia and nonsustained ventricular tachycardia.