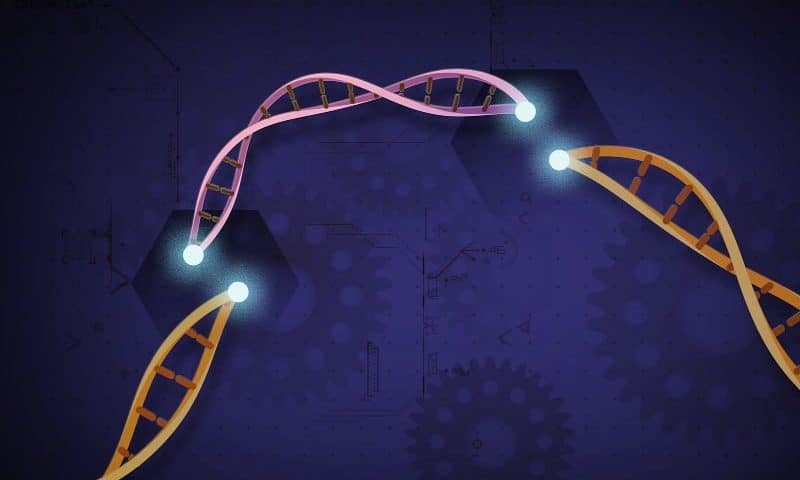 Why grab just a pair of scissors when you could get more functionality with a Swiss knife?

A team of researchers at Stanford University think they’ve built such a tool to apply to CRISPR gene editing, which could help advance the platform and make it easier to deliver into cells. the results were reported Friday in the journal Molecular Cell.

CRISPRs, or clustered regularly interspaced short palindromic repeats, are part of the bacterial immune system that defend against invading viruses. They are made up of repeating sequences of genetic code that are interrupted by pieces of genetic code from previous invaders, which allows the cell to detect and destroy returning invaders. The CRISPR-Cas9 system is a form of gene engineering that targets specific parts of the genetic code to edit DNA at specific locations. This enables researchers to modify the genes in living cells.

The gene editing field recently reached a major landmark when Intellia Therapeutics presented first-in-human data in June. But the technology as it exists now can only be applied to a small portion of the thousands of discovered CRISPRs because the Cas9 proteins in the system are too big. The Stanford researchers have now engineered a tinier version of the CRISPR-Cas system, aptly named CasMINI, which could unlock more applications and get into more mammalian cells.

As it stands today, less than 1% of discovered CRISPRs can work in human cells because they are too big to fit, which limits their use in gene-editing technologies, said senior study author Stanley Qi, an assistant professor at Stanford University, in a statement. CasMINI could help build better tumor-killing lymphocytes, reprogram stem cells or treat more genetic diseases in the eye, muscle or liver.

The large sizes of CRISPR-Cas systems can restrict delivery into cells and negatively impact their potential for clinical viability. Adeno-associated virus, a vector applied in AAV gene therapies that helps deliver the medicine, has a limited amount of space, meaning it can’t fit many Cas fusion proteins.

Stanford’s new miniature tool works with Cas12f, which could be the answer for fitting into those tight spaces, given the protein is less than half the size of common CRISPR systems that use Cas9 and Cas12a. Prior to the mini system, researchers were unsure whether Cas12f could be used in mammalian cells, but after some tinkering, the Stanford team was able to produce a class of Cas12f variants.

“If people sometimes think of Cas9 as molecular scissors, here we created a Swiss knife containing multiple functions. It is not a big one, but a miniature one that is highly portable for easy use,” Qi said.

The Stanford team claims to be the first to turn a non-working CRISPR into a working one through RNA and protein engineering. The engineered CasMINI is 529 amino acids, compared to Cas9’s 1,368 amino acids, which could fit better into available delivery mechanisms such as AAV packaging, lipid nanoparticles or other RNA-delivery modalities, the researchers said.

CasMINI is in its infancy and needs more work to be optimized for base and gene editing. The research team plans to test the system for in vivo gene therapies and has filed for provisional patents through the university.

“It is on our wish list that it will become a therapy to treat genetic diseases, to cure cancer, and to reverse organ degeneration,” Qi said.