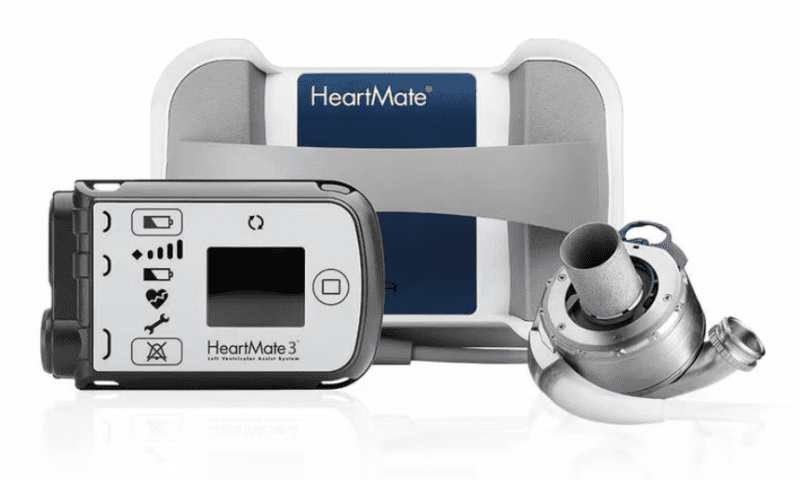 Studies have shown that heart failure—which affects about 6.2 million adults in the U.S. alone—may shorten life expectancy by an average of 10 years and that only about half of those with the condition will live for another five years after diagnosis.

But a heart pump from Abbott may give at least five years back to heart failure patients, according to clinical trial results presented this week at the 2022 European Society of Cardiology Congress in Spain.

The HeartMate 3 pump is a left ventricular assist device. LVADs are typically implanted in an open-heart procedure into the lower left ventricle of the heart to help pump blood from that chamber to the aorta and beyond.

Abbott’s device was initially approved by the FDA in 2017, indicated for use in patients awaiting a heart transplant. A year later, that approval was expanded to include advanced heart failure patients who need but aren’t eligible for a transplant. Abbott tacked on another approval for the LVAD in 2020, this one allowing it to be implanted in lateral thoracotomy procedures.

The newly released data comes from the medtech’s Momentum 3 trial, which tracked outcomes for five years after the HeartMate 3 was put in place and compared those to the results of both heart transplants and HeartMate II implantations. In total, the study comprised more than 1,000 heart failure patients, Abbott said in a Monday release.

According to the study’s results, the HeartMate 3 pump boasts a significantly higher five-year survival rate than Abbott’s previous model of the LVAD. A total of 58% of people implanted with HeartMate 3 lived at least to that point, compared to 44% of HeartMate II patients.

That five-year survival rate pushes the HeartMate 3 within a stone’s throw of heart transplants—often the most effective treatment for heart failure, but one limited to a narrow group of patients—which offer an average survival rate of around 70% after five years.

Without an implant or transplant, the median survival of people with advanced heart failure falls to less than one year, Abbott said in the release, highlighting the comparative benefits of its device.

“Thousands of people with advanced heart failure die every year because they do not receive a heart pump, largely because their physicians are not aware of the option or its full benefits,” Keith Boettiger, VP of Abbott’s heart failure business, said in the release. “There are too many patients who aren’t provided the opportunity to be evaluated for a heart pump, such as patients with obesity, diabetes, certain cancers and blood types or those from underserved communities across the United States.”

Abbott attributed the improved HeartMate 3 outcomes to a reduction in the fatal strokes, clotting and bleeding experienced by users of the second-generation HeartMate device.

That, in turn, is linked to the new pump’s Full MagLev flow technology, which uses magnets to “levitate” the interior rotor. That design creates more space within the pump’s blood flow pathways, reducing the trauma to the blood as it passes through the pump.

Alnylam clears phase 2 test for Regeneron-partnered nephropathy med, as it looks to play catch-up against Calliditas

Philips adds yet another ventilator recall to the docket, citing contaminated plastic